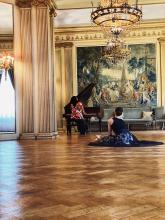 For the 2020 edition of Open House taking place in London this weekend, we have decided to make the most of the challenges imposed on us by the pandemic, using them as an opportunity to make a short documentary film to showcase the Official Residence of the Argentine Ambassador, as never seen before, as a way to keep our doors wide open (albeit virtually!)

Since becoming the first Official Ambassador’s Residence to open its doors to the public for Open House in 2006, Argentina has participated without fail in this annual event which involves over 800 historic buildings across London opening their doors to the public over one September weekend.

The film— produced by the Embassy of Argentina in the United Kingdom — reveals little-known parts of the house. Opened in 1851 and home to 21 Argentine Ambassadors since 1936, this year you will be able to discover secret passageways and architectural details of the original design by Thomas Cubitt or enjoy the paintings, dominated by European landscapes and Argentine artists.

Spectators will be able to enjoy the Official Residence in a completely unique way thanks to the involvement of a number of “permanent ambassadors” to the UK, whose history is intimately interwoven with that of the house. These will include World Cup champion Osvaldo “Ossie” Ardiles and principal dancer at the Royal Ballet Marianela Núñez, who performed an exclusive dance for the documentary to the piano playing of Marcela Roggeri.

The video tour also features a clip of artist Ricardo Cinalli, speaking before a piece of his artwork, commissioned for the house in 1980; and some words from Alicia Gilardoni, secretary to several Ambassadors, who has been there to see the comings-and-goings of some truly distinguished cultural and political figures from the two countries, including notable names like the Duke of Edinburgh, Prince Charles and the Duchess of Cornwall, Nobel Prize winner César Milstein, writer Jorge Luis Borges, musician Roger Waters and various Argentine Presidents.

Welcome to the Argentine Residence!

Watch via @ArginUK on Youtube https://youtu.be/2x5HXzJCqtQ
Copyright: Embassy of Argentina to the United Kingdom