SCIENTIFIC COOPERATION BETWEEN ARGENTINA AND THE UNITED KINGDOM 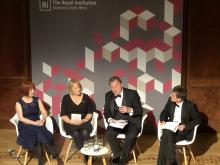 16th October.- Ambassador to the UK, Carlos Sersale di Cerisano, participated as a panellist, at the invitation of Britain’s prestigious and historic Royal Institution, in their annual flagship event, the “Faraday Dinner”. He was invited to the panel on the recommendation of the Chief Scientific Advisor of the Foreign and Commonwealth Office sharing the panel with Professor Carole Mundell, Chief Scientific Advisor to the FCO and the Director of the British Antarctic Survey, Professor Dame Jane Francis. The panel was chaired by the Director of the Royal Institution, Dr Shaun Fitzgerald.

During his talk, Ambassador Sersale stressed the importance of the interplay between science and diplomacy, as well as the value of international technical cooperation for our country, a policy that aims to build ties internationally and foster dialogue and negotiations in the bilateral, regional and multilateral arena.

The importance of work carried out in the field of bilateral cooperation in science and technology was also stressed, as were inter-institutional agreements, and areas of special interest for cooperation identified in the letter of intent signed in November 2016 between the Ministry of Science, Technology and Productive Innovation and its British counterpart.

Professor Dame Jane Francis noted that a memorandum of understanding centering on scientific cooperation was signed between the Argentine Antarctic Institute and the British Antarctic Survey on 14th May 2018.