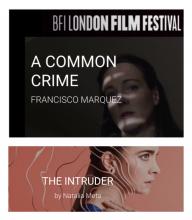 The 64th BFI London Film Festival will be showcasing two feature length films and three shorts to represent Argentina as part of the official selection at one of the world’s most prestigious film festivals.

The films include The Intruder (El intruso), by Natalia Meta, and A Common Crime (Un crimen común), by Francisco Márquez, and for the shorts: Salsa, Loose Fish and The Name of the Son (El nombre del hijo).

Amidst complications caused by the pandemic, the decision to go ahead with the festival (taking place between 7 and 18 October) is a resounding sign of support for the international film industry and of appetite for high quality films from the British public.

For the first time, in a major digital drive, the LFF will be accessible right across the UK, with over 50 digital premieres, free online events and screenings across the BFI Player platform.

In amongst the selection, rubbing shoulders with talent of the likes of Spike Lee and David Byrne, The Intruder and A Common Crime are to be screened 12th and 13th October respectively.

Based on the novel El Mal Menor (The Lesser Evil) by cult writer Charlie Feiling, and on Meta’s screenplay, The Intruder introduces us to the story of Inés, a soprano played by Érica Rivas (Relatos Salvajes/Wild Tales), who fights against intruders who have taken over her vocal chords. We bear witness to the endless struggle that plays out with her demons and the past.

Renowned film critic María Delgado, responsible for selecting both films, tells us: “The issue around how we come to terms with the legacy of the past and heal has rarely seemed more important”. The sound, produced by Guido Berenblum — a familiar fixture in the films of Lucrecia Martel —  “eerily creates the sensation of a paranormal world in which the troubled Inés is unable to easily rid herself of the demons that haunt her.”

On A Common Crime, Delgado said: “In this spine-chilling psychological thriller by Francisco Márquez, an economics lecturer — played by a compelling Elisa Carricajo — feels haunted by a crime that she could have prevented from happening. Márquez gives the psychological thriller format a fresh take to deal a searing critique to a society in which denial is a way of life. It is a tremendously political film. The contemporary landscape of Buenos Aires carries chilling echoes of the disappeared under the Argentine military dictatorship between 1976-83.”

At this 64th edition of the LFF the public will take the place of the official jury and will vote in four different categories: Best Fiction Feature, Best Documentary Feature, Best Short Film and Best XR. The winners will be announced at a live awards ceremony on the closing weekend of the Festival — 17 and 18 October 2020 — to be broadcast online and free of charge.

The digitalisation of content and the online offering are some of the distinctive trademarks of this year’s festival, which will also be offering access to talks with some of the biggest directors, writers and actors, including a pre-screening introduction or a post-film Q&A.

Short films Salsa, Loose Fish and The Name of the Son will be available throughout the duration of the festival free of charge exclusively on BFI Player.