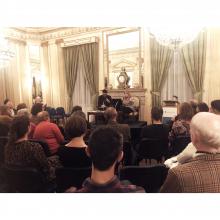 6th of November- Last Friday we celebrated Argentine literature in a conversation with writer Mariana Enriquez and Professor Ben Bollig (University of Oxford).

The audience –composed by members of the Argentine community, the Anglo-Argentine community and local book publishers– had the opportunity to exchange points of view with the recent winner of the Herralde de Novela Prize.

This week Mariana has become the sixth woman since 1983 to win the award given by Anagrama publishing house for her work “Nuestra parte de noche” (Our part of the night), also won by writers such as Enrique Vila-Matas, Roberto Bolaño and Alan Pauls.

Described by Dave Eggers as ‘a mesmerizing writer who demands to be read,’ Mariana is among a wave of Spanish-language talent whose work is finally being translated and published in the UK – and in many other countries.

Such is the case of her previous book “The things we lost in the fire”, translated into English by Megan McDowell in 2017 thanks to Programa Sur – a translation support programme to promote and strengthen the publishing of works of Argentine authors in foreign languages— garnering great reviews in the UK.  (Review of The Guardian here)

Throughout her career, Enriquez has published novels, novels, story collections, as well as a volume of written trips and a biography. Her fiction has appeared in the New Yorker, Granta, McSweeney’s, Electric Literature, and Virginia Quarterly Review and in anthologies in Spain, Mexico, Chile, Bolivia and Germany.