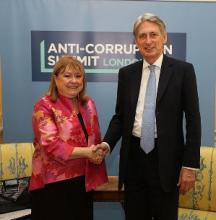 Argentine Foreign Minister Susana Malcorra met today with her British counterpart, Secretary of State for Foreign and Commonwealth Affairs Philip Hammond, in London. It was the first bilateral meeting between Foreign Ministers from the two countries in over fourteen years. Also participating were the Argentine Secretary for Strategic Affairs Fulvio Pompeo, Argentina’s Ambassador to the United Kingdom Carlos Sersale di Cerisano and, from the British side, Minister of State at the FCO Hugo Swire.

The meeting was held in parallel with the capital’s Anti-Corruption Summit, where Argentina and the United Kingdom agreed, alongside the other countries participating, on the need to adopt a global plan for cooperation on a number of measures and institutional improvements to be made to eradicate corruption, a global scourge that impedes economic growth and development in all countries.

The meeting was conducted in the atmosphere of cordiality, friendliness and positive expectations with which democratic countries are welcoming the recent changes that took place in Argentina in the wake of last November’s elections. During the encounter, the Ministers covered a positive agenda based on mutual respect and complementarity that included a wide range of issues of bilateral interest. While each party had the opportunity to express their differences, this didn’t prevent the two countries from identifying potential areas in which they could work together. The issues addressed included boosting trade and investment both qualitatively and quantitatively, cooperation in science and technology, fighting organised crime – with particular emphasis on drug trafficking –, fostering institutional cooperation and increasing tourism as well as exchanges in the fields of culture, education and sports. They also highlighted the importance of the Argentine community in the UK, especially its contributions in academia and the professional sphere.

Minister Malcorra addressed all these issues in the wider context of the need to further the three main policy aims set out by President Macri: zero poverty, fighting drug trafficking and institutional development as a way of unifying the Argentine people. The British government expressed its full support for these aims.

Regarding the Malvinas Question, both Foreign Ministers expressed the positions of their respective countries, and agreed that disagreement on the issue must not get in the way of the development of a broader positive agenda. They also stressed the need to identify potential areas for cooperation in the South Atlantic, such as the exploitation of natural resources and connectivity between the continent and the islands. Collaboration in the Antarctic was also discussed.

Image: Minister Susana Malcorra and her her British counterpart, Secretary of State Philip Hammond, in London.